24, Her Version of Events, letters,

Dear Oreoluwa
You are about to get a text from ICAN that would make you feel like your world is crumbling and someone is twisting your insides. I need you to know that this isn’t the end of the world and your insides are fine.
I know your birthday is tomorrow and you want to stay in bed and wallow in self-pity. Please don’t plan a trip to the dam, Mo will take the best photos of you and Tofu would surprise you with a cake for the first time since your fifth birthday. 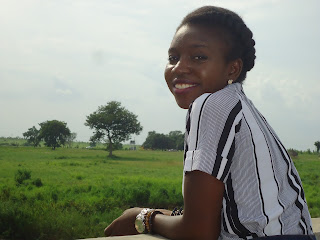 Cut your hair, it is long overdue don’t worry it would grow, take longer walks, have longer conversations with Aunty Kemi and Mr Mayor they have an arsenal of knowledge you would need in the coming months. Stop running to Lagos every weekend, you would miss Ilorin so much when you leave and not have the opportunity to visit.
Your holiday to Ibadan would be life changing, your inspiration for life would be renewed and you will meet and accidentally fall for someone, don’t think too much of it, just go with it. This experience would make you very happy, sad and angry, all at the same time. You can choose to avoid this all together by not having a conversation about the Civil War. This is totally up to you.
You will have another episode of depression and thoughts about dying, talk to someone about it; it isn’t bad to ask for help. Mama is trying, cut her some slack open your mouth let her know what is going on, let her know how you are feeling. Communication will make a lot of things easier to deal with in the coming months.
Don’t be Afraid; fear would keep you from a lot of adventures, go to places on the spur of the moment; the things you worry about currently wouldn’t matter in a few months.
Lastly google ‘’Bethel Music’’ and ‘’Shima Yam’’ you would thank me later
life lessons,

Dear Readers, This is the concluding part of Tales of a North Central Corper Part 1 enjoy!!!!
It was a windy Monday morning, the 1st of June 2015. I hadn’t gone to work for almost three weeks I was feeling guilty for neglecting my students, for not rendering my service to the nation but I wasn’t looking forward to going back to work. It felt monotonous, I didn’t feel like I was making any difference, my students seemed to remain at the same spot they were when I met them. When I looked at them, their head looked like hard coconuts with no water, those types that make the loudest noise.
But they are not all bad, they have this bright light in their eyes when you introduce something new, educate them about something they have never heard of, that light is gone once you are done speaking  and they go back to rapping Yoruba. I was no longer motivated to teach.
My fellow corps members were tired and had cut the number of days they came to work and the hours they spent on the days they showed up. So at 8:45am on the this ‘’wonderful’’ Monday morning I sat alone in front of the Vice Principal Special Duties – Mama Special’s office , to report for duty.
Because of the lack of teachers, Mama Special doubled as a Christian Religious Studies (CRS) teacher and she was in class when I arrived so I sat and waited for her on the rickety bench in front of her office. I watched students stroll in well into the first period and the only resident Math teacher laid down the law; he caned the late students. He was famous for making passes at every woman in sight. It made me wonder about how the human mind works and how complex it must be.
I saw an old woman walking across the school field towards the Mama Special’s office, most of the field is sandy with patches of yellowing grass scattered around. The Math teacher stopped beating the late students and came to welcome the old woman.
She said her granddaughter went missing on Saturday and she came to ask for the school’s help in locating her. The math’s teacher immediately went into action, locating the girl’s class and her friends to question them on the whereabouts of the girl.
Mama Special joined the search party once her class was over. About an hour later, one of girls came forward with a story I had heard a number of times in the last few months and it still felt too good to be true.
‘’She dey her boyfriend house.’’ She whispered to the math’s teacher
‘’Speak out.’’ The maths teacher shouted at her.
She went on to describe the house of the boyfriend, the regular advice followed;
‘’Mama it would pay you to involve the policemen’’ Mama Special said, she handed her a piece of paper with a phone number written on it.
The maths teacher followed the old woman, in the school bus which had busted windows with doors that didn’t close properly. In my short six months working at the school this was the 4th time something of this nature was happening and it broke my heart every time it happened.
It is compulsory for Corpers that belong to the HIV/AIDS Community development group to start a health club at their respective places of primary assignment so I got involved with the health club after the first incident. I was surprised that these students knew that the local pharmacy sold birth control pills and were well informed on other preventive measures.
The health club convener decided teaching abstinence was a waste of time, so we taught preventive measures, the advantages and disadvantages of the various measures.
After the first test I gave my students, I found out that many of my students couldn’t spell their names and couldn’t construct two sentences in English. I made a rule in all of my classes that English was the official language of communication.
I decided to pick students at random to read, a hand full of them could read smoothly, others fumbled on the big words and an alarming number couldn’t make meaning of the words written in their texts
The other corpers and I started a class to teach our students to read and write, we encouraged the students to attend, they were eager for the first two lessons and gradually none of them showed up for the meetings.
I found the zeal and energy I had on the first day gradually ebb away, I didn’t enjoy teaching anymore. I found myself counting down to the end of my NYSC year and dreaming of the things to come to get myself though the remaining days.

Looking back, I feel I let myself down, that I could have done much more if I encouraged myself, adjusted my expectations to fit my reality, kept going instead of mentally checking out but I find solace in the little that I did and keep looking for opportunities to change the world.

I couldn’t take my eyes off her drawn eyebrows, she must have shaved the last trace of hair off many years ago, from where I stood, it looked like she chose a semi liquid eye liner and made perfect semicircles where her eyebrows used to be.  I took my eyes off her eyebrows and concentrated on other parts of her appearance, she was dressed in ‘’iro’’ and ‘’buba’’ and had on matching head tie in gold and black. This made her look like a wedding guest instead of the vice principal special duties of the secondary school that was to be my home for the next one year.
I listened to her jump from Yoruba to English as she talked to me about the ‘’time book’’ I needed to sign on days I came to work, the ‘’pink card’’ that had a list of my classes and ‘’dress code’’ that was appropriate for work. I had to stop myself from laughing out loud at that point, I made a mental note to laugh about it later.
Finally she handed me a collection of WAEC past questions on Literature in English, a pile of photocopied poems with footnote analysis on the poems to teach SS1 to SS3 students’ literature. As I walked out of her office to the sitting area for NYSC teachers, I wondered about the texts for drama and the texts for prose and if she knew that the SS3 students’ syllabus is different for the SS1 and SS2 students’ syllabus.
On my way, a male teacher walked past me in ‘’buba’’ and ‘’sokoto’’, talking with rapt attention to a female teacher dressed in a long skirt, blouse and head tie to match, made out of Ankara and almost matching winter jackets. They were conversing in Yoruba and clearly painted on all the walls in green were the words ‘’Always speak in English’’.
I arrived at the makeshift office for NYSC teachers, I sat at one of the tables and gave the school another look. From where I sat it looked like a bunch of rectangle boxes around a field with yellowing patches of grass and two football goal posts; just the rusting iron frames, without the nets.
I didn’t pay any attention to the conversations going on around me; I tried to remember at which point I fell in love with Literature in English and why I choose to teach it.
****
‘’Why they keep giving us nasty fish stew and bread is beyond me’’ I complained to my friend as we prepared to attend Literature class. I had my ‘’Exam Focus in Literature’’ in one hand and tapped my head to make sure my pencil was tucked safely into my hair. We walked to the class next to ours because our teacher; a short skinny man whose clothes never fitted properly was already waiting. When he opened his mouth to speak all his other flaws disappeared and anyone listening was sucked into whatever he was saying immediately.
We were analysing a poem ‘’The Road Not Taken’’ by Robert Frost. My teacher recited the poem by heart, when he was finished he made us take turns in explaining how the poem made us feel and what lessons we were able to draw from the poem. Maybe it was because of the magic in his voice, we all had something to say; the poem took us all on personal journeys within the 40 minutes of the lesson.
*****
I yearned to give my students the same experience, help them fall in love with literature and appreciate words and the weight they carry.
My eyes caught the first poem on the pile ‘’The Fence’’ by Lenrie Peters, I read though the poem and decided it was fit for my first lesson. I decided to give the students my best, study properly before each class and help them find an escape in words.
But this wasn’t what happened.