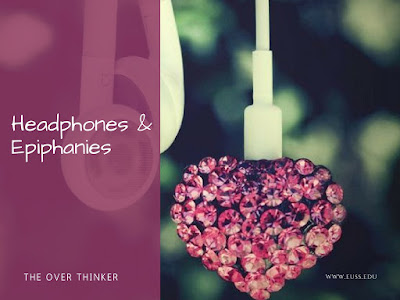 I love sounds, maybe not as much as some people I can imagine, but I can definitively say I love sounds. Not in that unrealistic way people claim to love – like you could never get annoyed by it, or like something doesn’t change about that love down the road – it has changed, it has annoyed me but I still love it. I try to be as truthful as possible; you know, the truth has a way of lightening the load.

So, let me define what I mean by sounds – – actually, I don’t think I can. Sounds sha; kpa kpa, po po, pi pi, gbesh!… Stuff like that. Of course, it differs; mood, environment, head-space – I’m human, Let me live. So, it is this love of sounds that has given rise to an eclectic taste in music, [Eclectic; a word which here means deriving ideas, style, or taste from a broad and diverse range of sources] which I am quite proud of, if I might add. And along this road, that is, this journey I call life, these sounds have created markers of sorts, check points if you will, which when re-heard cause various kinds of reactions – unbeknownst to the people around me (LOL! I like that word “unbeknownst”. Unbeknownst… LOL). For example, I heard the sounds from The Legend of Zelda: The Ocarina Of Time recently and I could have sworn I was sitting on a soft bean bag, which is what I sat on when I played it, whereas instead I was sitting on a most uncomfortable wooden chair (Gosh! I can’t wait to play Breath of the Wild). I think that there is the definition of nostalgia. Here,… below, I have five (5) songs that I have explored with my headphones (because that’s what songs are to me – an adventure – discovering new sounds that you won’t have heard if you weren’t looking), five songs that have caused a very sudden realization of truth – Epiphanies – or Eureka moments… Sometimes.

RepJ360 is a band that means a lot to me, partly because it’s my band but also because they are trying to do something that is different in an unlikely space and it is hard. In making this song I was reminded over and again that when you surrender yourself to the One who made all, a peace will come over you. So much so that when you’re owing a producer money, and you have none, you won’t worry because you just know He “got your back”. Yes, I believe hard work will pay off, but I also think that’s a misnomer [Misnomer; a word here which means a wrong or inaccurate name or designation], it really doesn’t have to be hard.
“…I am Yourrrssssssss…”
The Liturgists – Vapor (A Meditation) [Vanity, Peace]
I’m coming to realize that I’m a person that seeks peace. Not because I’m troubled, but because I see chaos around me daily – I live in Lagos Nigeria, if that means anything to you. So, when my brother sent this track to me I was very appreciative of it because it made the “vanity upon vanity…” idea more real to me and it presented it in a way that is realistic – you don’t have to be a Christian to understand it.
Of course, we often look at the notion of “vanity upon vanity” as a depressing thought but indeed it is freeing because it reminds us that the things that cause us worry are all going to the dirt with everything else. So why worry, when you can ‘not worry’.
“…finitude, after all, is what makes life sweet. Christmas time can be such a magical and wonderful time of the year because it only happens once, not in spite of it.”
Casting Crowns – If We Are The Body [No judgment, Love is a verb]
The very first Casting Crowns song that I heard all those years ago, I can almost remember the smell in the air that day as I lay down on the bunk bed in the room I shared with my cousins, using earphones that I didn’t own with an MP3 player I coveted. I was probably fourteen at the time but the lyrics struck me as hard as they do now. I think it was from that point on that I began to lose some of my respect for the church. I was pained that people did not feel safe in the presence of fellow believers and non-believers felt judged when in their company. I asked myself is this what Jesus caused, had he come to elevate a few and then scorn the rest. – – So why is the “body of Christ” so judgmental, so sanctimonious and so picky of who they show love to. From then on, I have refused to be any of those things, because Christ wasn’t any of those things and because love knows no sin. It’s hard work.
“If we are the body, why aren’t His hands reaching…”
Switchfoot – Thrive [Prosperity is a state of mind]
I’m sure a lot of us know that we were made to thrive not just survive. A common saying that has been going around, especially among people of faith. But we don’t seem to believe it, my mother says that the most unbelieving people are the “believers”, and I think it’s true. If only we believed half of the things we hear in church, we would practice them and we would be the better for it. This song kind of put all that prosperity talk into perspective for me, it’s not in what you own but what you do with it, how we approach it that is. That’s it. I’m not sure if I communicated that properly. Maybe some other time. Check out the song though.
“A steering wheel don’t mean you can drive, a warm body don’t mean you’re alive.”
Hans Zimmer – The Dragon Warrior [Life can be an adventure]
You know how literature is defined as a mirror of life. Maybe you didn’t, okay, Literature is defined as a mirror of life. It’s actual not far off from the literal truth. This song for some weird reason says to me, “go out there and grab it”. It has no words but Mr. Hans Zimmer knows how to really get you inspirated [Inspirated; a made-up word which here simply means, inspired]. In case you didn’t recognize it, it’s from the animated movie Kungfu Panda 3.
Your life is a really great movie. You just need to allow yourself to live it.
Turns out my list is not as eclectic as I made it sound. Maybe one day I will share my music library, that’ll definitely show how diverse my palette is [Palette; a word here which means taste] or you could just follow me on Spotify or Deezer (Toby Johnson) I’ve got some neat playlists, and you could also check out the full playlist for Headphones & Epiphanies on Spotify or Deezer
Perhaps the ideas above are a little hifalutin [check your dictionary], or maybe they aren’t, who knows. You could find out. Maybe you could have a couple of epiphanies of your own.
Let me know your thoughts in the comments below or on my social media:
https://www.facebook.com/tobyvanjohnson
https://www.instagram.com/tobyvanjohnson/
https://twitter.com/tobyvanjohnson